KUMAO!!!! Mothball bear in the shop!! New from Japan 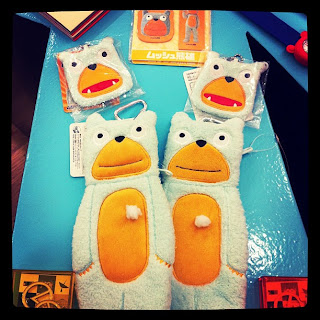 The japanese company Mushuuda makes odorless mothball-like insect repellents for your closets or drawers in Japan. Recently though, they have been producing a series of quirky and charming commercials featuring a funny looking bear named Kumao, who has a hole eaten in his "costume" and some of his stuffing is coming out.
In one of the commercials he goes to the zoo and notices the polar bear also has some stuffing popping out. It turns out the polar bear is Kumao's brother in a polar bear suit.
The commercials are becoming very popular and the characters are now being produced in a variety of products. Bags, pouches, stationary, figures..
We have a very limited amount of items featuring Kumao so get them while supplies last!!
Check out the cool commercials here:
http://www.youtube.com/watch?v=ucbfwcChGGI&feature=related
http://www.youtube.com/watch?v=PlWC3CS4ShY&feature=related
http://www.youtube.com/watch?v=W3KdLHOEETE&feature=related
Posted by Chris Mitchell at 10:49 PM